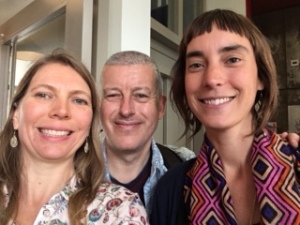 Marcus Armstrong has been a Peace & Justice and Human Rights worker for over 20 years, specialising in peacekeeping missions to the Middle East. Marcus also works as an international mediator, negotiator and trainer in nonviolence an conflict resolution, mainly in Europe, Africa, India, Palestine and Iraq.He has extensive experience as a trainer and as a community worker and describes himself as an anti-nuclear and anti-war activist, participating in nonviolent acts of disarmament and civil disobedience.

Christina de Angelis brings an extensive range of experience in training, conflict resolution,  and leadership development in private, not-for profit and public sector organisations in diverse countries including Australia, France, Northern Ireland, Ukraine, and the Pacific. Her clients have included public servants and police cadets in Northern Ireland, ex-combatants in the Solomons Islands, university students, teachers, Rotarians, and young people. Her work includes facilitating workshops on nonviolence, conflict resolution, reconciliation, non-violent communication, mediation and restorative justice. Recently she finished her MA researching Restorative Justice in Brazil. She also has an MA in Conflict Resolution from the University of Bradford. Finally, she followed a course of the Engage Nonviolent Living Study Program in Australia, a course that inspires the Learning Peace Program.

Nina Koevoets is the fou

nder of ToNoWo. The curriculum is inspired by a 10 week long program in Nonviolence from the Metta Center (USA, 2009), and the work of Pace e Bene. Currently she is working on a Handbook “Engaging Nonviolence Activating Nonviolent Change in Our Lives and Our World” for Pace e Bene. She has two master degrees: in Conflict Resolution and Governance (2006-7) and in Global Studies (2011-13). She attended a Summer University on Civil Resistance and completed an internship at the University of Gothenburg with the Resistance Study Group. She did internships at several NGOs, for which she lived in Palestine and India and volunteered as a workshop facilitator for two years.